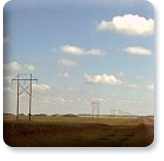 Keystone Insulator Cleaner, Inc. was established in 1974. Later, in March of 1988 the company moved to Bedford, PA and became incorporated. The owner, Chester McNally had worked for another insulator cleaning company for approximately ten years prior to his decision to go on his own. At that time, there were very few companies in the United States involved in insulator cleaning, especially while energized. The majority of insulator cleaning was done by hand and this turned out to be very labor intensive and time consuming. Early on, facilities had to shut down they're power to clean contamination from dirty insulators. In many places, with heavy levels of contamination, cleaning them by hand became a thing of the past once they learned of companies who would clean them, while energized. Some of our customers today, are the same ones of this era. As word got out, the trade caught on like wildfire. Companies became very interesting in the process after learning they would not have to shut they're facilities down and spend countless dollars on unproductive methods of cleaning they're insulators. Today, the company is still going strong, doing business all over the United States. Throughout the years, with many attempts to come up with more effective methods, dry media blasting still remains the most effective, cost efficient and safe method of cleaning energized insulators. With over 37 years experience, Keystone Insulator Cleaner, Inc. is recommended as the best in the business!

WHEN DID IT ALL START?
Energized Insulator Cleaning started in the late 1960s as a process in which companies would be able to maintain their operation without shutdown periods required for maintenance in their substation switchyards, transmission lines or poles. Our method of “Dry Blasting” energized insulators is the safest and most effective way of cleaning contamination from insulators, which causes flashovers or arcing, ultimately resulting in power outages to our customers.
TESTIMONIALS
"I thank you, we have had a good working relationship over the years and Keystone has always provided us with quality work and timely customer service to help us in meeting the needs of our customers as well as maintaining our system reliability."

"Thanks, your guys did a FANTASTIC job and likewise your firm was professional and turned an ugly situation into a WIN-WIN condition. Thanks again for your expedient service."

If you should have a special situation or a specific problem not mentioned here, please contact: